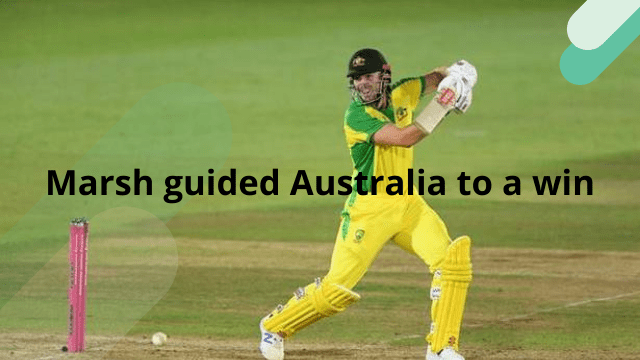 The Aussies have something to cheer at the end of this three-match T20I series against England. After losing the first two matches, Australia has bounced back and won the last T20I match of the series by 5 wickets at Southampton in Rose Bowl.

Australia won the toss once again and they opted to bowl this time just like the 1st T20I. England had rested Morgan and Buttler for the final T20I as Moeen Ali was named the skipper for this dead rubber. Australia as well-rested Warner, Cummins and Carey. These three players were replaced by Mathew Wade, Josh Hazlewood and Mitchell Marsh in their playing XI.

Tom Banton who got the opportunity to open the innings after two T20I matches, failed to shine in his preferred batting position. Banton scored just 2 runs in this match. He was the first one to fall by the hands of Hazlewood.

The in-form batsman Dawid Malan and Johnny Bairstow took the score above the 50 run mark. Malan continued his classy work in the shortest format. But Bairstow was the one who grabbed all the attention after being out of form in the series.

England needed to kick on after they reached above the 50 run mark but the wickets of the middle order batsmen of England told the same old story. England’s batsmen didn’t take the responsibility of guiding the innings in the absence of Buttler and Skipper Morgan.

In their absence, Dawid Malan was a big threat to Australia because he was in brilliant form. But it was Adam Zampa who dismissed Malan for 21 runs and that triggered the middle-order collapse. Sam Billings who got his chance in this match didn’t take this opportunity to make it as a golden one. Billings was out after 2 overs for just 4 runs.

Johnny Bairstow scored a vital half-century in the context of the game. But personally, this wasn’t the greatest knock played by him. He should have stayed till the end and guided England to a defendable score just like Jos Buttler did on Sunday which helped England to clinch the series. Bairstow fell for well made 55 runs just before England could reach their score of 100 runs.

The stand-in skipper, Moeen Ali too didn’t provide that finishing kick which would have taken England past 150 runs mark. Ali scored 23 runs to this name. It was Joe Denly who stayed unbeaten till the end and guided England towards a modest total after their 20 overs were completed. Denly was unbeaten on 29 runs which helped England to set a target of 147 runs for Australia.

Australia’s bowling is the one who has been impressive in this whole series. This time, all of their bowlers took at least 1 wicket to their name. Adam Zampa took 2 wicket wickets while Starc, Hazlewood, Kane Richardson and Ashton Agar took 1 wicket each to their names.

Australia managed to chase this target down despite David Warner was not in their squad and Steve Smith was sent to bat at the number 5 position. Matthew Wade opened the innings with Skipper Aaron Finch, while Marcus Stoinis was promoted at the number 3 batting position.

Finch and Wade started the Australians in a good way. The openers had put on 31 runs from just 3 overs. Finch continued his good form with another top contribution. But Wade should have taken this opportunity to shine in the absence of David Warner.  Wade’s wicket was the first one to fall in the Australian innings as Mark Wood continued his good work with the new ball.

After Wade was dismissed for just 14 just runs, Finch and Stoinis rebuild the Australian innings with a mini stand of 39 runs. They looked good to chase this modest target down with ease. But the dismissal of Marcus Stoinis gave the momentum back in England’s favour. Stoinis was out for 26 runs.

Later, Adil Rashid picked up three more wickets to put the pressure back on Australia. Glenn Maxwell and Aaron Finch were out in the same over and within two balls. Finch’s good cameo knock was ended once he was clean bowled by Rashid for 39 runs. But for Maxwell, it was a struggle. He faced 11 deliveries before he was dismissed for just 6 runs.

Australia reached the 100 run mark, but the wicket of Steve Smith was horrifying for the visitors. It looked as if Australia’s middle order will collapse like the 1st T20I. Smith was dismissed by Adil Rashid for just 3 runs.

But this time collapse wasn’t meant to be for Australia. Ashton Agar supported Mitchell Marsh well to finish the game in style. Marsh was unbeaten on 39 runs and Agar was not out on 16 runs. These two batters guided Australia to a 5 wicket win over England in this final T20I match and with this win, Australia also retains their top spot in the T20I rankings.

England bowlers well. But the target was too small for them to defend and another thing which didn’t go their way was Jofra Archer went wicketless in this match. But Still, Adil Rashid had put up a decent fight. He picked up 3 wickets to his name while Tom Curran and Mark Wood took 1 wicket each to their names.

Mitchell Marsh was awarded the man of the match for his stellar all-around show. Marsh bowled well and his batting services too was vital. He helped Australia to chase the modest score when three quick wickets fell around him.

The Next Series between England Vs Australia is the three-match ODI series. The first ODI match of this series will be played on Friday, 11 September 2020 at Emirates Old Trafford in Manchester.