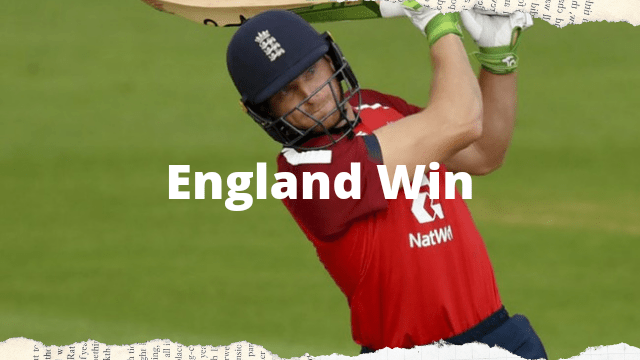 England is still dominant in the T20 International format against Australia at home. The home side continued their ruthless approach in the shortest format as they bagged another series of the shortest format on Sunday. Australia has just 1 T20I win on England’s soil till now. The visitors hoped for a turn around in the series-deciding match. But the batting powerhouse of Australia had let them down earlier in the day and then it was a heroics unbeaten knock from Jos Buttler which took England home with ease.

The Aussies won the toss and decided to bat first. The openers from Australia were in a decent form. They had shared a good partnership which kept Australia in the game on Friday. But on Sunday, Warner bagged a rare duck in his T20I career. the destructive opener faced just three balls before he edged the ball of Jofra Archer to Buttler behind the wickets.

Australia had a horrifying start. They didn’t even recover from that, Mark Wood gave the tourist another blow. Alex Carey’s promotion at number 3 batting position didn’t work as he was the next one to join Warner at the pavilion. Carey managed to score only three runs.

The number 4 batter Steve Smith looked in good touch and he gained a little momentum with his skipper Aaron Finch. But England’s skipper was one who broke the mini stand between the two Australians greats. Morgan was dead accurate right with his throw and Steve Smith was found short of his ground. Smith had to depart after he scored just 10 runs.

The middle-order batsmen and Aaron Finch were the real contributors for Australia in this match after the top 3 was out in quick succession. Finch and Stoinis tried to steady the Australian innings and gain the momentum back.

Both saw Australia towards the 50 run mark with no further hiccups. They aimed to get their team towards the 100 run mark with all the seven reaming wickets intact. But England’s Chris Jordan bowled a beauty and got the vital wicket for his team. Finch was clean bowled for a well made 40 runs.

Then, Stoinis got to his highest T20 International score, but he couldn’t kick on after the dismissal of Aaron Finch. Adil Rashid was the man who dismissed Marcus Stoinis for 35 runs.  Glenn Maxwell and Ashton Agar were the batters who batted well for Australia after Stoinis was dismissed.

Maxwell played well for his 26 runs and he was equally supported well by Ashton Agar. But Australia didn’t get the finishing as they would have liked. Australia needed Maxwell to stay till the end. But he was out in the 18th over after being set.

The same mistake was repeated by Ashton Agar as well. He played decently to score 23 runs. He was also well set to take Australia’s score above the 160 run mark. Unfortunately, Agar was run out in the last over and the visitors managed to a decent total of 157 runs in the end with Cummins and Starc were unbeaten after Australia completed their quota of 20 overs.

England bowlers did a commendable job. They attacked the top order batsmen of Australia in the powerplay overs which put the pressure on the middle order batsmen and then when the home side knew that the surface is suited for the slow pace bowlers. England used their slow bowlers very well.

Chris Jordan picked up two wickets to his name while Jofra Archer, Mark Wood, and Adil Rashid picked up 1 wicket each to their names.

England had an easy run chase even after Bairstow, Banton, and Morgan failed to deliver. It was Jos the boss who guided his team over the line with an unbeaten fantastic knock of 77 runs. Buttler again opened the innings with Johnny Bairstow in this encounter.

But this time it wasn’t a flashy knock which he played in the first T20I on Friday. This time, Jos Buttler showed his pure class. He was calm and composed even after he saw three wickets fell quickly, he didn’t get shattered. Buttler held his nerve and that’s what gave him a huge success in the end.

Dawid Malan was another batsman who performed well for England. Malan has held the number 3 spot . He has been a consistent performer for the home side. In the first T20I, England won the match mainly due to Malan’s batting heroics and in the second game, he took England close to the total. Malan scored 42 runs and shared a partnership of 87 runs with Buttler.

But the Australian bowlers fought back. They broke the partnership and got the wicket of Dawid Malan. Then, they picked Tom Banton and Skipper Eoin Morgan early to put the pressure right back on England.

But England didn’t press the panic button as Buttler and Moeen Ali finished the game in style. Ali hit a big six and brought the target down within touching distance. Then it was Buttler who finished the game with another huge six for England. The 2010 World T20 champions sealed the series with one game still to go.

The Australians had a tough day at the office. Their bowlers were impressive but the batsmen had let them down and the innings from Jos Buttler took the game away from the visitors. Ashton Agar picked up 2 wickets to his name. While Starc and Adam Zampa picked up 1 wicket each to their names.

England sealed the three-match T20I series with 2-0 margin and Buttler was given the man of the match award for his brilliant batting display.

The third and the final match of this series will be played at the same venue on Tuesday 8th September 2020.