Home » IPL 2020 » IPL News: The Five Star players who will miss the 13th edition of the Indian Premier League in UAE

IPL News: The Five Star players who will miss the 13th edition of the Indian Premier League in UAE 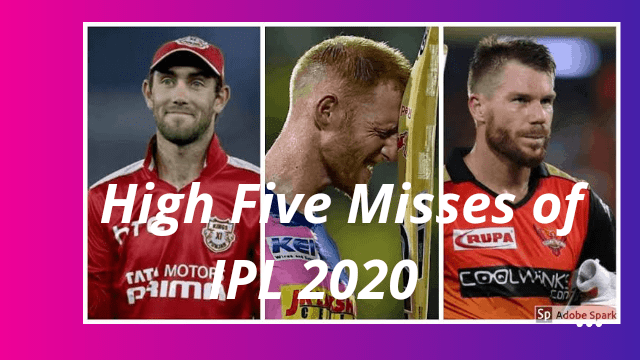 IPL: Top 5 Youngest Players whose life has changed due to the IPL 2020 contract

Even after the delayed start of the 2020 season of the Indian Premier League – IPL, the tournament will not be played in its usual charming way. Due to the world pandemic of COVID 19, the tournament was postponed and there some players who will miss the tournament due to their commitments with their International team.

This cash-rich league tournament eagerly waited every year with great anticipation. The preparations of the players, coaching staff, support staff, franchises and the IPL stakeholders have started in a great way. The fans too are waiting to see their stars live on the television sets.

But not all the fans would get to watch their favourite players who will play for their most loved teams in the IPL. This is the most unfortunate that high-quality players like Suresh Raina and Ben Stokes will have to miss this cash-rich league tournament due to their family reasons and commitments.

Stokes will miss the IPL as well. He represents the Rajasthan Royals franchise. Stokes’s father has been diagnosed with brain cancer that is why England Cricket Board – ECB has granted Stokes an indefinite compassionate leave.

The other players from England and Australia will also miss the first half the tournament. The players will be busy playing their limited-overs series matches till the 16th of September 2020. Then after that, the players from both the countries will leave for UAE and they will go in isolation for 6 days before playing their first match of the 13th edition of the IPL.

Australia Tour of England 2020; England announced their squad for the limited-overs series against Australia without Ben Stokes

Ahead of the 13th edition of the Indian Premier League, we shall bring the list of the 8 IPL teams who will miss their key players. The IPL 2020 season is also a torrid time for the franchises as they will not have star players in their team.

Not having pure match winners affects factors will like team composition, winning composition, planning and strategies of the teams. All the teams will be on the back foot from word go in this IPL 2020 season.